This treatment is only becoming more popular. You need to know this before you start treating type 2 diabetes with CBD

CBD is quite popular in every drugstore and has taken a starring role in gummies, tincture oils, lotions and sparkling water. Some people consider CBD is the best ingredient of this day and age.
CBD is used to relieve stress, anxiety and pain. “When people are in pain, stress levels increase cortisol and blood sugar,” claims Veronica J. Brady, Ph.D., CDE, a registered nurse and an assistant professor at the Cizik School of Nursing at the University of Texas in Houston. If pain is relieved, stress will be alleviated and it will be beneficial for blood sugar levels and sleep, she adds. People who have type 2 diabetes, want to know how will CBD help their symptoms. Even though some healthcare professionals believe CBD is helpful for treating diabetes, it has only treated epilepsy in kids effectively. However, more research needs to be done on CBD and type 2 diabetes.

“It Is yet not known whether THC or CBD controls blood sugar by affecting diabetes itself,’’ says Cory Toth, MD who is a neurologist at Fraser Health at Burnaby Hospital in British Columbia. He also believes that people use CBD and THC in order to relieve their pain. It is very important to know that CBD does not affect the brain in a psychoactive way like THC.

Why do people with type 2 diabetes consider CBD

People with type 2 diabetes consider CBD as a key ingredient for treating their diabetes.

The patients of Dr. Brady who were diagnosed with type 2 diabetes often used CBD to reduce their nerve pain. She says that patients rubbed their feet or painful areas with CBD tinctures or oils. CBD could be bought at marijuana dispensaries and instructions about the dosage were also given. “Patients were concerned about how will their blood sugars be affected by CBD,’’ says Brady.

Finally, she says that patients who used CBD claimed to have reduced their nerve pain, improved their blood sugar and their sleep quality was better.

Heather Jackson, founder and board president of Realm of Caring in Colorado Spring, Colorado, a nonprofit that focuses on cannabis research and education observed that the diabetes community was interested in CBD. “People consider using CBD as supplementation and alternative treatment,’’ says Jackson, and he adds that they often ask if cannabinoid therapy is helpful for nerve pain and blood glucose.

Jackson says that the Realm of Caring receives around 7,000 inquiries monthly, and the organization knows all the information about the callers, their health conditions and where they live. People who have type 2 diabetes do not call often but currently, their database has around 330 people who have diabetes.

Jackson says that the Realm of Caring does not provide cannabis or medical advice, it only educates doctors and clients about the effects of cannabis. “We are only educating people, and want them to talk to their doctor about the information we provide.” 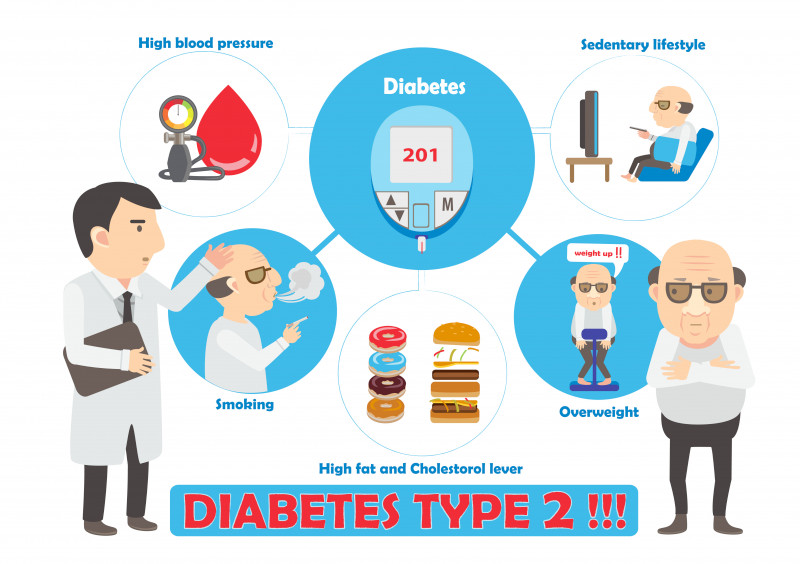 Even though people with type 2 diabetes are interested in using CBD, not enough precise information and studies are done on the effect of CBD on type 2 diabetes, says Y. Tony Yang, MPH, a doctor of science in health policy and management and a professor at George Washington University in Washington, DC. Randomized controlled trials which are the gold standard of medical research are absent, according to a June 2016 article in the New England Journal of Medicine.

A small study published in October 2016 in Diabetes Care in the United Kingdom found that 62 people with type 2 diabetes who used CBD did not lower blood glucose. They were not on insulin or on other drugs for diabetes, and they were selected randomly into groups that got treatment for 15 weeks; 100 mg of CBD twice a day, 5 mg of THCV twice a day 5 mg CBD and 5 mg THCV together twice a day, 100 mg CBD and 5 mg of THCV together twice a day or a placebo. Authors found that the blood glucose control of patients who used THCV rather than CBD had improved.

A Canadian study published about neuropathic pain of 37 people who had diabetes found that their nerve pain was reduced with the help of a synthetic cannabinoid so-called nabilone. “Patients reported that their anxiety was relieved and their sleep quality was improved, says Dr. Toth, who led the study. “Pain is tightly linked with depression, difficulty in sleeping and anxiety”. Nabilon is thought to target those important features in patients who have diabetic nerve pain, and it is often prescribed for pain in Canada.

However, research about CBD is still being developed. Some CBD and diabetes studies experimented in rats but it doesn’t apply to human health. Other studies have been done at the body’s endocannabinoid system, which is signaling about sleep, stress pain and other relevant functions. There are also studies that have looked at marijuana and diabetes but not CBD such as the American Journal of Medicine.

Regulatory barriers prevent researchers to do more studies about CBD in people with type 2 diabetes says Dr. Yang. Cannabis is pointed out as Schedule 1 drug with the highest restrictions by the 1970 U.S Controlled Substances Act.

Yang says that it is very difficult to acquire cannabis for research studies, and the National Institute on Drug Abuse has limited supplies of it. “Finances are a problem as well,’’ says Yang. “If the National Institutes of Health are more open-minded, we will do more research”. Also, other funders need to be willing to donate money for research purposes. Currently, 33 states and the District of Columbia allow cannabis to be used medically and 11 states allow cannabis only for recreational purposes.

From a historical point view, cannabinoids (a group of chemicals in the cannabis plant) are put together such as THC, CBD and many others. Jackson says that recently CBD was isolated by growers and manufacturers, by cultivating an industrial hemp that is high in CBD and low in THC. The industrial hemp was removed from the controlled substances list by the 2018 Farm Bill, and it made the research of hemp and CBD more available.

“Most of the clinical studies of CBD relate to how cannabinoids has been treated as a group,’’ says Toth. “They have always been regarded as a stain”, he says.

“Access is very difficult to be attained by researchers to quality, quantity and type of cannabis product which was necessary for cannabis usage research,’’ says Yang.

FDA, Patient use and Quality and Quantity of CBD

People who have type 2 diabetes do not wait for additional studies. Brady says that younger patients, in particular, were more open about using CBD, while even though older patients were hesitant at first to buy CBD in marijuana store ended up buying it in the end. Brady adds that some people believe that CBD is the same as smoking marijuana but in reality, THC and CBD are different chemicals that affect the brain and body in a different way.

In 2018 the treatment of children epilepsy with CBD was approved by the FDA or the U.S. Food and Drug Administration. But for now, the FDA does not approve CBD for treating diabetes or other conditions. In December 2018, the FDA said that it is against the law to sell supplements or food that contained CBD under the Federal Food, Drug and Cosmetic Act. In April 2018 the FDA stated that it’s re-evaluating products that contain cannabis, and on May 2018 it held a public hearing about cannabis products.

“Currently the FDA uses its resources on removing CBD products that claim to cure or treat diseases, which leaves a lot of CBD products for sale,’’ wrote Pieter Cohen, MD, and Joshua Sharfstein, MD, in a July 2019 perspective in the New England Journal of Medicine. Dr. Cohen is an assistant professor of medicine at Harvard Medical School in Boston, and Dr. Sharfstein oversees the office of public health practice and training at the Johns Hopkins Bloomberg School of Public Health in Baltimore.

Jackson says that it is very difficult to know what’s inside CBD products sold on the market. A study published November 2017 in the Journal of the American Medical Association claims that only 30 percent of products that contained CBD were properly labeled with under- and over- labeling of CBD, and some of the products even contained chemicals such as THC which were not listed.

When the article was written, a spokesperson for the Joslin Diabetes Center in Boston, an affiliate of Harvard Medical School, said that no feedback was provided by the research center about CBD and type 2 diabetes.

Jackson says that CBD could interact with certain blood pressure and cholesterol drugs, and a study published a study published June 2017 in Cannabis and Cannabinoid Research gave details on these interactions. Researchers wrote that people who used CBD experienced side effects such as diarrhea, tiredness and weight or appetite changes.

“It is very important to know what you put in your body,’’ says Jackson, and adds that people with disrupted health conditions such as diabetes should be very cautious about it. Jackson’s son suffered from epilepsy so she has experience in using CBD as a treatment. She says that consumers should ask the manufacturers if the CBD products are free of pesticides, mold or other toxins.

Jackson’s nonprofit – Realm of Caring evaluated products and manufacturers by creating a reference sheet. It also supports products that stick to the standards of the American Herbal Products Association and the FDA’s Current Good Manufacturing Practice regulations.

Brady and Jackson advise people with diabetes to first consult with their healthcare provider before they use CBD as a treatment for their diabetes. Brady says that even though she is a diabetes educator it is very difficult to find research about CBD and type 2 diabetes. “If people feel any pain related to their diabetes they should contact their healthcare provider in order to get some information on how to manage the pain naturally.’’