It’s no secret that the cannabis industry is set to experience a huge boom over the next decade. But digging down deeper there is one “under the radar” cannabis-related industry that has the potential to create even more enormous wealth. 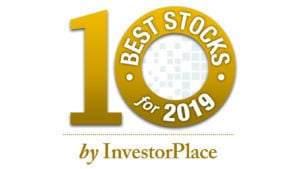 Most investors — even those familiar with legal cannabis stocks — know practically nothing about it, and they stand to miss out on large profit potential.

But that’s not us. Because I told you about this “secret” industry months ago… back in December, in fact. The leader in this industry is my pick in the Best Stocks for 2019 contest.

I’m talking about the CBD industry. It’s poised to grow 40-fold (no joke) over the next decade.

CBD is short for cannabidiol, which is what’s called a non-psychoactive compound found in both the cannabis and hemp plants. That’s a fancy way of saying CBD will not get you “high.” I could write an entire book on the benefits of it. It’s considered one of the most beneficial compounds available to humans.

Charlotte’s Web is the early leader in this booming, up-and-coming industry. It produces and distributes CBD wellness products, including everything from tinctures to topicals to capsules, both online and in stores. And as a result, it has become the world’s leading CBD brand by market share.

The company has been a pioneer in the industry since being founded in 2013. Its brand became well known after a CNN documentary based on the life of a little girl named Charlotte Figi. Charlotte suffered from up to 300 grand mal seizures per week, but she found treatment — and almost a cure — in cannabis oil. The brothers who manufactured the strain were the same group behind Charlotte’s Web.

If you’re interested in reading more about Charlotte’s story, check out my initial recommendation here.

A Buying Opportunity for Life-Changing Profits

Charlotte’s Web put together a fantastic start to the year, rallying to an all-time high of $25.25. However, it has since gotten caught up in the broad volatility that plagued the cannabis industry throughout the summer. 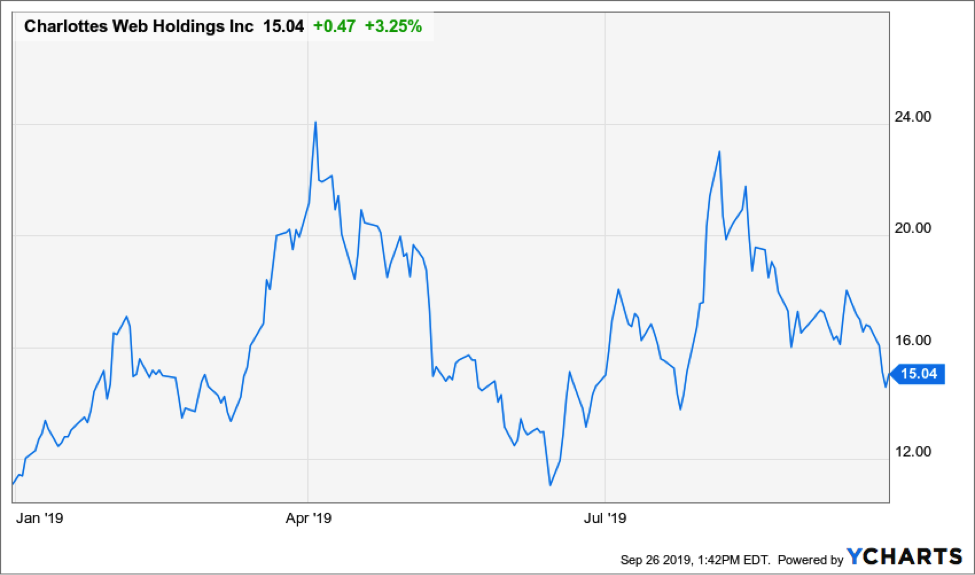 CWBHF shares fell below $11 in June before rallying back above $23 in August. After the company released earnings (which we’ll talk more about shortly), the stock has once again dipped back to the $15 area. But this weakness presents an enticing opportunity to buy into one of my favorite ways to play anything and everything related to cannabis.

Charlotte’s Web’s products are currently sold in 8,000 retail locations across the United States, including CVS Health (NYSE:CVS) and Kroger (NYSE:KR). Plus, it continues to bump up its product portfolio — hemp extract-infused CBD gummies are now offered in three flavors.

On September 24, the company announced that The Vitamin Shoppe (NYSE:VSI), a specialty retailer of nutritional products, has commenced selling the new line of CBD gummies in 738 stores across 45 states.

To keep up with the rising demand for CBD, Charlotte’s Web increased its total acres planted by 187% to 862 this year.

Looking forward, there are a couple of catalysts that will drive growth. The first is increased production. In 2017, the company produced 63,000 pounds of hemp, and that number skyrocketed to 675,000 pounds in 2018.

In August, Charlotte’s Web announced that it is expanding its cultivation, production, and research and development to support forecasted sales growth from $125.9 million this year to $454.19 million in 2021. It’s building a 136,000 square-foot industrial building in Louisville, Colorado to prepare to meet increasing demand from consumers and national retailers.

The second catalyst is more distribution outlets as chain retailers start to become the largest sellers of CBD. Major retailers will demand a large and easily accessible inventory. The logical choice for major retailers such as Kroger or The Vitamin Shoppe and others is to turn to the market leader, which in this case is Charlotte’s Web.

According to projections, chain retailers will make up 64% of the $22 billion hemp-CBD market by 2022. That’s a total of $14.1 billion in sales. To put that number into perspective, realize that in 2018 the total sales from chain retailers was zero!

I expect to see the number of retail outlets almost double — if not more — in the next two years for CWBHF. As the mass adoption of CBD grows, it will lead to increased demand from the market leaders, and eventually Walmart (NYSE:WMT) and other behemoths will begin to sell CBD as well.

In its most recent second-quarter report, Charlotte’s Web stock’s revenue grew 45% to $25.02 million. However, that missed analysts’ estimates of $27.8 million, which gave some investors cold feet. Earnings of $0.02 per share were also below expectations of $0.04.

Even though earnings missed analyst estimates, Charlotte’s Web remains one of a handful of cannabis companies that is able to turn a profit. That’s huge. CWBHF is expected to earn $0.19 per share this year, followed by $0.69 in 2020 and up to $1.07 by 2021.

With a market cap of $760 million, the stock is undervalued based on both earnings and revenue forecasts. Using the 2021 numbers, which is less than two years from now, CWBHF stock trades with P/E ratio of 14.3 and a price-to-sales of 1.67.

Stocks that are in high-growth sectors such as cannabis and CBD should (and typically do) trade at valuations higher than the overall market. A P/E ratio between 40 and 50 for Charlotte’s Web would be in-line with other high-growth stocks.

Putting a P/E ratio of 50 on the company’s 2021 earnings would have the stock price at $53.50. At that level, the price-to-sales ratio would still be similar to where it is today, which makes it a reasonable target in the next two years. That’s a potential gain of 250% from current prices.

Can it get enough of those gains in the next three months to win the Best Stocks for 2019? I think so.

Matthew McCall is the founder and president of Penn Financial Group, an investment advisory firm, as well as the editor of Investment Opportunities and Early Stage Investor. He has dedicated his career to getting investors into the world’s biggest, most revolutionary trends BEFORE anyone else. The power of being “first” gave Matt’s readers the chance to bank +2,438% in Stamps.com (STMP), +1,523% in Ulta Beauty (ULTA), +1,044% in Tesla (TSLA), +611% in Liquefied Natural Gas Limited (LNGLY), +324% in Bitcoin Services (BTSC), just to name a few. If you’re interested in making triple-digit gains from the world’s biggest investment trends BEFORE anyone else, click here to learn more about Matt McCall and his investments strategy today.